A panel discussion and concert at the Stuttgart Public Library presented preliminary results of research involving the Stuttgart Chamber Orchestra, the ZKM, and HLRS.

As awareness of artificial intelligence (AI) and access to AI applications spreads, people from a wide spectrum of disciplines have begun to investigate what opportunities it might offer. The creative arts are no exception. In a cooperative research effort facilitated by the Media Solution Center Baden-Württemberg, scientists at the High-Performance Computing Center Stuttgart have been working alongside the Stuttgart Chamber Orchestra, the Hochschule der Medien, and the Hertz-Lab at the Center for Art and Media (ZKM) in Karlsruhe to explore a provocative question: Could an algorithm generate a unique composition that is indistinguishable in style from something Mozart might have produced?

In a recent event held at the Stuttgart Public Library, SKO General and Artistic Director Markus Korselt explained that the research continues a history of innovation that has long been a hallmark of the orchestra. “When I arrived at the Chamber Orchestra five years ago the question was, what in music is today’s undiscovered North Pole?” he said. “One answer was digitalization, and so we set out to explore this completely amorphous topic and have been trying to squeeze new artistic potential out of technology. Our goal is to expand our range of expression and to create new content.”

AI experts led by HLRS’s Dennis Hoppe have been supporting this effort under the auspices of the CATALYST project as a way of exploring new frontiers in the use of high-performance computing. “At HLRS our interests don’t only overlap with engineering and industry, but also with many other fields with societal relevance,” he explained. “In cooperation with the Media Solution Center we are interested in bringing our expertise to society, and this project offers a great opportunity to contribute to culture.” 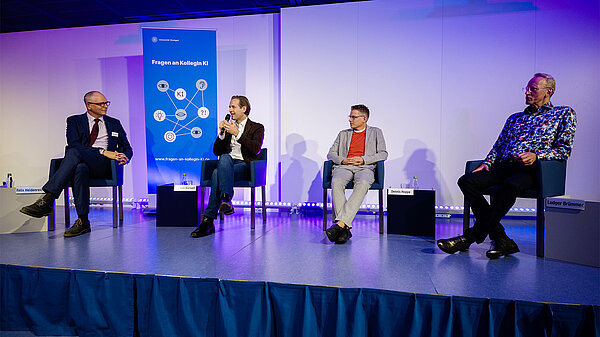 Ludger Brümmer, a composer and digital artist who leads the Hertz Laboratory at the ZKM, introduced the machine learning-based methodology the team has been using in their effort to generate Mozart-like compositions. Although imitating a famous composer poses a new and exciting challenge for research, he also pointed out that reproducing the music of the past is only one step in addressing a much more interesting problem. “The real question,” he said, “is will such a system be creative in such a way that it can make the music of tomorrow?”

The panel discussion, moderated by Felix Heidenreich of the University of Stuttgart’s International Center for Cultural and Technological Studies (IZKT), considered a variety of questions concerning how artificial intelligence is affecting music now, and how its role might evolve in the future. As Brümmer pointed out, AI technologies for music composition are already being commercialized, and could soon offer a cost-effective way to produce functional music for television shows or public spaces. Commenting on the state of the art in AI, Hoppe noted that as larger supercomputers and datasets become available, there is little doubt that machines should be able to imitate composers competently. As the panel discussed potential scenarios in which AI might be used, Korselt predicted that if applications of AI in music can be imagined, they are likely to be realized. The panelists suggested that at least for now, AI might best be applied as a tool that composers use in an iterative way, where the software generates ideas and the artist revises them to be more musically interesting. It is likely that the human composer will also continue to remain essential in understanding how music can move audiences and contribute to society, Brümmer remarked.

Following the panel discussion, the audience experienced the preliminary results of this machine-human collaboration, when members of the SKO performed several compositions generated by the team’s experiments. Although the variations contained moments that were recognizable as being Mozart-like, the concert was unique in offering a way to experience the challenges that can result from this dialogue. On the one hand, the machine’s struggle to emulate the composer’s style was audible. On the other, the chamber orchestra was called upon to navigate a composition created without an understanding of musicians’ capabilities or audiences’ expectations. When additional members of the orchestra later joined the musicians for a vibrant performance of Mozart’s String Quartet in C Major (K 515), the differences between the original and the imitation were still clear.

The event took place as part of a series titled Questions for Our Colleague, AI, which is sponsored by the German Federal Ministry of Education and Research (BMBF).

Watch video of the panel discussion. (German only)