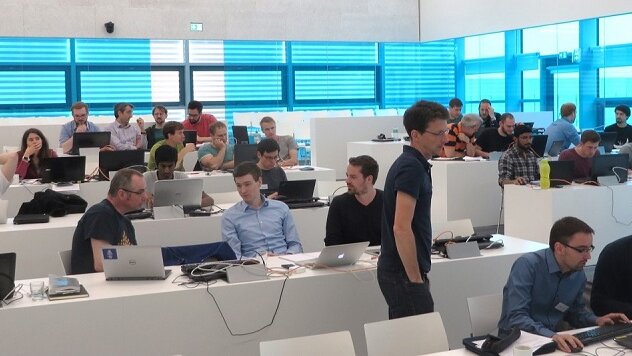 Unix / C or Fortran (or Python for the MPI part)

Please refer to the course overview.

This course provides scientific training in Computational Science, and in addition, the scientific exchange of the participants among themselves.

All times are local times in the central European time zone (Berlin).

Most MPI exercises are (in addition to C and Fortran) also available for Python+mpi4py+numpy.

Besides the content of the training itself, another important aspect of this event is the scientific exchange among the participants. We try to facilitate such communication by

For your safety, we will only allow fully vaccinated or fully recovered or COVID-19 negative tested participants on all days. You must wear a medical face mask or FFP2 mask everywhere on site. If a distance of 1.5 m cannot be guaranteed inside, e.g., if you are working in pairs in exercises, it must be an FFP2 mask. Details can be found on the registration page.

We strongly recommend to choose travel options and hotels with the possibility to cancel (even close to the event) because we might be forced to deliver the course as an online course.

Register via the button at the top of this page.

Monday-Tuesday: This is an HLRS course with the following fees:

Wednesday-Friday: For participants of the above categories, this course is sponsored by the PRACE PATC program, i.e., there are no course fees if you register only for Wednesday-Friday.

For all other participants (Mo-Fri), this course is an HLRS course with the following fees:

Link to the EU and EU-associated (Horizon Europe), and PRACE countries.

Our course fees include coffee breaks (in classroom courses only).

HLRS is part of the Gauss Centre for Supercomputing (GCS), which is one of the six PRACE Advanced Training Centres (PATCs) that started in Feb. 2012.

This course is a PATC course, see also the PRACE Training Portal and Events. For participants from public research institutions in PRACE countries, the course fee is sponsored through the PRACE PATC program.

HLRS is also member of the Baden-Württemberg initiative bwHPC.

This course is also provided within the framework of the bwHPC training program.

Optimization of Scaling, I/O and Node-level Performance on Hawk