EOPEN aims to tackle the technical barriers arising from the massive streams of Earth observation data to ensure scalability of the data harmonization, standardization, fusion, and exchange methods.

Earth observation (EO) is all about collecting information about the Earth by remote sensing. Specifically, a series of satellites are collecting scientific data such as images and geo-positioning information to survey the Earth. The vast amounts of data collected contribute to a number of public policies and economic sectors including environmental protection, precision farming, or the detection of oil spills, to name but a few. In Europe, Copernicus, a joint service between the European Comission and the European Space Agency, operates a series of satellites and missions. For example, the so-called Sentinel-3 mission is about measuring the sea surface topography in order to improve forecasting systems and climate monitoring. Although the data can be accessed openly via Internet, the data sets are spread across multiple locations in Europe. 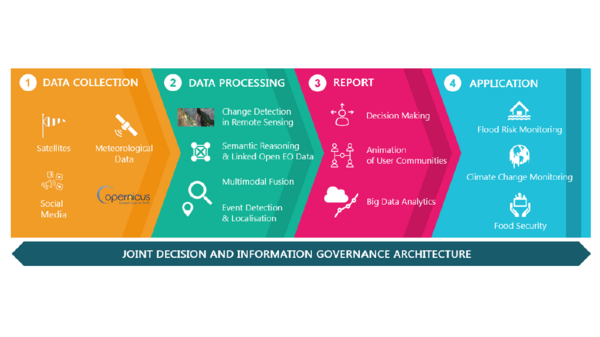 The platform will be evaluated based on the three distinct, and challenging case studies: flood risk monitoring, climate change monitoring, and food security.

HLRS provides its HPC and Big Data infrastructures, as well as contributing to ambitious data analytics tasks such as clustering of EO and non-EO data.