Digital Twins Can Support Planning in Cities and Municipalities

At a recent workshop, HLRS invited planners and representatives of local governments to learn how simulation can assist community development and improve citizen engagement.

Whether large or small, towns everywhere face a host of complex challenges. From managing city development, to preparing for and reacting to natural disasters, to solving mobility problems, to meeting climate sustainability goals, a systematic understanding of many interrelated factors is often necessary to make good, sustainable planning decisions. Because city development often requires different kinds of expertise — including that of engineers, architects, city planners, and government officials — the ability to communicate clearly based on a shared understanding of many technical details is also often critical. Moreover, as citizens have shown increasing interest in participating in planning decisions, ensuring that nonspecialists better understand urban development has grown more urgent.

Scientists at the High-Performance Computing Center of the University of Stuttgart (HLRS) have been developing new solutions that use computer simulation to make such challenging city planning processes easier. Chief among these is a concept called the urban digital twin, a highly detailed model of a city or town rendered in virtual reality (VR). In several recent projects, HLRS has been investigating how digital twins can make city planning more intuitive and facilitate better community engagement.

In an online workshop organized in late March, government officials and planners from towns and cities from the State of Baden-Württenberg and beyond had the chance to learn about recent applications of urban digital twins at HLRS. By demonstrating several innovative examples of this approach, the workshop encouraged attendees to think about how simulation using urban digital twins could help them in their own planning activities.

"HLRS has sophisticated tools as well as the expertise to support local communities in many different ways," said HLRS Director Prof. Michael Resch. "This workshop was a first step to introduce local communities to the opportunities that digital twins could offer them and hopefully to establish contacts that could lead to exciting new collaborations."

What is an urban digital twin?

An urban digital twin is a highly detailed model of a city, town, or other location rendered in virtual reality. Using powerful supercomputers, electronic sensors, and state-of-the-art technologies for data analysis and visualization, urban digital twins integrate both visible and invisible features of the built environment in an immersive, interactive format. Wearing 3D glasses or a VR headset, one enters a realistic reproduction of a place and can explore it at many scales, even down to the level of a pedestrian looking at individual streetscapes and buildings. 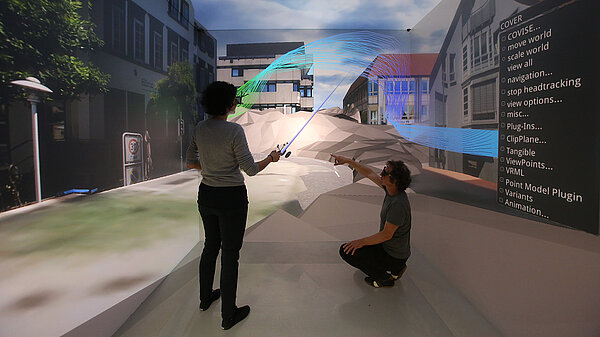 The digital twin of Herrenberg includes a model of particulate matter and wind flow into an interactive 3D model of the city in virtual reality.

An urban digital twin can also place any feature that can be captured as data — airflow patterns, climate change predictions, or traffic simulations, for example — into its spatial context. By superimposing such data on a realistic representation of a town, digital twins immediately make complex relationships easier to imagine and understand. Moreover, digital twins make it possible to test scenarios in the computer without the need to run disruptive or impossible experiments in the real world. For example, a virtual model can predict and visualize how a building or closing a street to traffic might affect noise levels.

At HLRS urban digital twins are developed in the CAVE. This room-sized facility allows visitors to navigate through a virtual city in a way that feels very much like walking through a real one. The CAVE is large enough for project partners and stakeholders to meet inside the realistic simulation and discuss the insights that it reveals. HLRS has also exhibited urban digital twins on screens at public events, making it possible to present city planning scenarios to interested citizens in a way that facilitates better understanding and direct communication.

Many applications of urban digital twins

In an early collaboration, HLRS scientists worked with the nearby city of Herrenberg to develop its first digital twin. In introductory remarks at the HLRS workshop, Susanne Schreiber, director of Herrenberg's Office of Construction, reflected on the city's reasons for using this approach. "Many of us who worked for the City of Herrenberg saw the chance to help city residents understand city development processes in a new way," she explained. Herrenberg received an enthusiastic response at a public demonstration of its digital twin, which reproduced the entire city in virtual reality. Since then, Schreiber reported, the city has been working to integrate sensors and new datasets into the model to gather weather data, track when plantings around the city are in need of watering, manage automobile parking capacity, and conduct simulations to predict how physical changes could improve air quality.

Webcasting from HLRS's visualization laboratory during the workshop, staff from HLRS'S Visualization Department also demonstrated more recent examples of digital twins they have developed. A digital twin of the Stuttgart region, for example, integrates GIS data with realtime traffic, weather, and air quality data to identify air pollution hotspots. In a project called Cape Reviso, scientists at HLRS have also been using a digital twin of Stuttgart's vibrant Marienplatz to study how conflicts between pedestrians, cyclists, and other vehicles could be reduced. The team also presented an ongoing collaboration with the Tallinn University of Technology in which they are using a digital twin of the Estonian capital to study the potential benefits of new plantings and green spaces. Displayed in a storefront in the middle of the city, the digital twin is being used as a participatory tool that enables city residents, planners, and managers to do virtual green planning.

In the project Cape Reviso, HLRS is exploring how simulation could help identify strategies for reducing stress between pedestrians and cyclists. 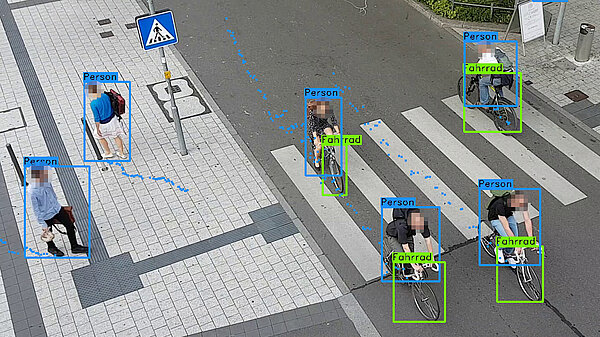 In addition, the workshop highlighted applications of urban digital twins for emergency preparation. Virtual models can help to identify locations at risk of flooding due to sudden storms or tsunamis, for example, or to predict the spread of disease in pandemic situations. Responding to growing interest in and need for crisis computing resources in Germany, HLRS recently received funding from the Baden-Württemberg Ministry for Science, Research and Art and the Federal Ministry of Education and Research to launch a project called CIRCE. In the three-year effort HLRS will be with government agencies to determine how access to HLRS's large-scale computing resources could enable them to react quickly and effectively in crisis situations.

Although such examples demonstrate many potential applications of digital twins, the concept is flexible and is intended to be adaptable to the specific needs of individual cities and towns. "At HLRS we look forward to speaking with cities and municipalities across Baden-Württemberg to learn more about their needs and how this new use of digital twins for city planning could help them to address the challenges they face," remarked Dr. Karin Blessing, who moderated the event.