In June 2017 the engineering company thyssenkrupp Elevator AG began operating the world's first elevator capable of moving horizontally as well as vertically. Called the MULTI, the new concept mounts elevator cabins on rails instead of suspending them on cables, offering increased flexibility of movement and exciting opportunities for architects to begin rethinking how large buildings and building complexes are designed. The first fully operational prototype is now running in a specially built tower located in Rottweil, Germany.

Working behind the scenes since 2014, the High-Performance Computing Center Stuttgart (HLRS) played an important role in the MULTI's development. Researchers in the HLRS Visualization Department collaborated with thyssenkrupp Elevator engineers and construction managers at Ed. Züblin AG to conduct simulations that tested key features of the new system before it was built. Using numerical simulation as well as virtual reality tools, HLRS made it possible for the engineers to spot design flaws early, assess mechanical configurations and physical stresses that could affect the MULTI's operation, and investigate the experience that its users could expect. The tools that HLRS developed will also support the design of future MULTI installations.

"Combining virtual building models and elevator models makes a lot of sense," says Uwe Wössner, head of the HLRS Visualization Department and leader of HLRS's participation in the project. "I see a great opportunity here."

Early in the development process thyssenkrupp Elevator realized that it was important to understand how users would interact with the MULTI system and how this experience would differ from more conventional elevators.

To help address such questions, the HLRS visualization team used data from thyssenkrupp Elevator to create a virtual reality simulation of the elevator system and tower. Once displayed in the CAVE, an immersive three-dimensional virtual reality facility located at HLRS, engineers and architects could interact with the model, moving through it to gain a sense of how a user might experience the actual elevator and observing its highly complex mechanics in action. The simulation helped the developers identify features in the design that either caused usability problems or that could be improved upon, such as collisions between machine parts in motion that would have been much harder to detect in computer aided design (CAD) software alone.

Working with Züblin, HLRS also integrated its virtual reality simulation into the firm's building information modeling (BIM) strategy. In this case BIM started with a CAD model of the building and elevator system as well as functional data about all of the parts and materials that go into their construction. This made it possible to simulate, for example, whether the elevator would operate properly, stopping at the correct pickup points and moving most efficiently through the structure.

The BIM model also enabled the construction managers to plan the build itself—for example, determining how large components such as motor blocks should be brought into the building during construction and how they should be rotated into position.

During multiple iterations in the development of the elevator and tower models, representatives from thyssenkrupp Elevator and Züblin periodically visited the CAVE to explore the virtual reality model. HLRS also supported the thyssenkrupp Elevator engineers in building a simpler version of the VR facility in their home office so that they could use virtual modeling as they made improvements during their day-to-day design activities.

When designing a new elevator, one other factor that developers must consider is how air moves through an elevator shaft. As cabins move passengers from place to place, the air that they pass through has to go somewhere, causing turbulence that can affect the elevator's operation. Two cars passing one another in a shaft, for example, can cause noise and vibrations that disturb passengers' comfort, generate stresses on machinery, and increase energy consumption.

In addition, planners must also consider what happens when a moving cabin compresses air as it approaches the end of an elevator shaft. Typically, shafts have empty rooms at their ends to accommodate this pressure, but engineers must always optimize the size of this space and the holes through which the air passes to balance the system's technical requirements against the importance of using space and materials most efficiently. In a flexible and adaptable system such as the one that MULTI offers, projecting these kinds of effects on airflow becomes even more challenging. 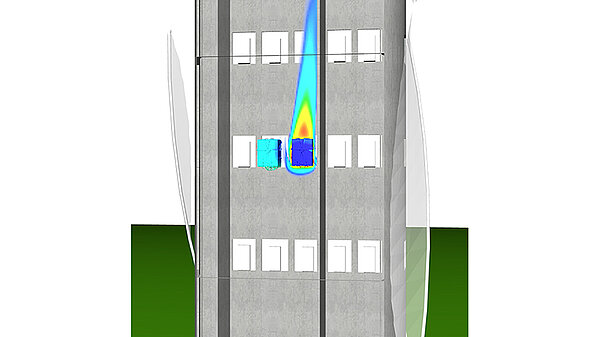 "Because the whole concept was so new," says Thomas Obst, an HLRS researcher who investigated these problems," thyssenkrupp Elevator wanted to know how simulation could help them. We discovered that it could continually inform changes in the system that would lead to improvements."

Even in conventional vertical elevator systems, airflow dynamics are different in every building. In developing simulations of the airflow in the MULTI system installed in Rottweil, therefore, an additional goal for the team was to develop a method in which new shaft geometries could quickly be imported and simulated.

"Normally every time you lay out a new elevator geometry you need to start again at the beginning and redo a lot of calculations," says Wössner. "With the simulation approach we used, it's just a matter of importing the new geometry digitally and running a couple of scripts. It makes it much quicker and thus less expensive than other methods to test new ideas."

Also important to the construction of the prototype in Rottweil was predicting the effects of airflow around the exterior of the building. Because no one lives or works in offices there, the structure is much thinner than a conventional high-rise, meaning that it is also more susceptible to swaying due to wind. To counteract this force, the building incorporates counterweights that dampen the wind's effects.

During the design process, engineers created a small-scale model of the building and tested it in a wind tunnel in order to determine the optimal size and configuration of the dampening system. HLRS then performed numerical simulations and showed that in reality the structure was actually likely to behave differently than what was predicted in the laboratory tests. In follow-up investigations engineers confirmed that HLRS's simulations were probably more realistic than what was measured in the wind tunnel, though the more conservative experimental model was still valid.

HLRS investigators simulated airflow around a model of the Rottweil tower to assist in the design of stabilization measures. (Image: HLRS) 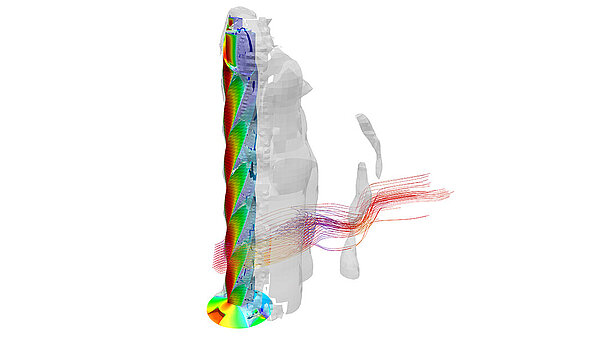 "Once MULTI begins being installed in real buildings," Wössner says, "builders will want to base their plans on accurate models of reality rather than conservative estimates. When they optimize the system, they will need to find the sweet spot where the tolerances properly balance safety needs with the practical need to control costs. The precise values that come from computational modeling will be valuable in achieving this."

At the same time that the Rottweil tower began operation, thyssenkrupp Elevator also announced that it had found a customer for MULTI to be installed in a new development being planned in Berlin. The company hopes that this will be the first of many projects that exploit their system's unique capabilities. And as additional installations accumulate, simulation will have an important ongoing role to play.

"In the future it's going to be a huge advantage to be able to virtually install a MULTI system in a specific building during the development phase," Wössner points out. "This will make it possible for the client to see, long before construction begins, how it operates and to try out different combinations to see what options best meet his or her needs. Does a new building need two shafts, for example, or would three make more sense? You wouldn't be able to answer questions like this by looking at one specific building because the needs will be different every time."

When building physical prototypes becomes prohibitively time-consuming and expensive, simulation and visualization offer powerful tools that can save time and costs, and prevent construction delays. As the MULTI system becomes more widely adopted, HLRS's contributions to its development will continue to be important for its future success.