Researchers are working to identify materials and methods to improve water electrolysis, a promising approach that could more efficiently store energy generated from renewable sources.

Advances in renewable energy technologies continue to move humanity closer to being able to power our lives using cleaner, safer methods. Whether it is wind turbines or solar panels, researchers have made great strides in making these sources more efficient.

One major issue remains, though, and it is unlikely to go away any time soon—humans have no influence over when the wind blows or the sun shines. This means that in order to use renewable energy on a global scale, researchers must also devise methods for efficiently storing excess energy generated during “boom” times so there is ample power stores for moments when renewables are not keeping up with demand.

Among the promising contenders for storing excess energy, hydrogen is among the most popular. In a process called water electrolysis, scientists can create chemical reactions to break down the molecular bonds of water molecules so they become their constituent parts—hydrogen and oxygen. The resulting hydrogen molecules must then be compressed into storage containers where they can be used as replacements for dirtier energy sources coming from fossil fuels.

While researchers have made some progress identifying ways to do electrolysis at an industrial scale, there is still one major hurdle to clear—currently, iridium is the only catalyst proven to remain both active and stable enough to facilitate water oxidation, a key step in water electrolysis. Unfortunately, natural sources of iridium are vanishingly rare on the Earth’s surface. Without having the technology to drill down to the Earth’s core or harvest iridium from passing meteors, researchers must search for either an entirely new material or develop metal alloys—mixes of two or more different metals that retain certain characteristics from their constituent materials—in order to scale up water electrolysis to the point where it can make a meaningful contribution to global energy storage requirements.

Recently, researchers from the Fritz Haber Institute in Berlin have been using the Hawk high-performance computing (HPC) system at the High-Performance Computing Center Stuttgart (HLRS) to model the complex chemical reactions that take place during electrolysis at a molecular level. The team hopes that by using both cutting-edge experimental techniques and world-class supercomputers for simulation, they can gain a greater insight into what makes iridium so effective in order to develop an efficient method for using hydrogen to store energy on a global scale. 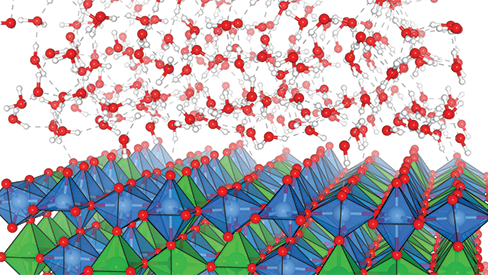 The solid-liquid interface at the iridium rich surface of an Ir-Nb mixed oxide water oxidation catalyst. Iridium atoms are shown as blue, niobium as green, oxygen as red and hydrogen as white. Image: Travis Jones.

Funding for Hawk was provided by the Baden-Württemberg Ministry for Science, Research and Art, and by the German Federal Ministry for Education and Research through the Gauss Centre for Supercomputing (GCS). Hawk is part of the GCS national supercomputing infrastructure.

“It really is a million-dollar question about why iridium is so special,” said Dr. Travis Jones, Fritz Haber Institute scientist and a researcher on the project. “There are a lot of ideas out there, and many of them revolve around the idea that the absorption energy of different intermediates in the reaction is ideally balanced. That said, a deep understanding is lacking, so we can’t just look at the periodic table and say iridium works for electrolysis because of how many electrons it has. We would love to know what it is about iridium makes it work so well in this context.”

Gaining a more fundamental view into how molecules behave during electrolysis requires both world-class computing resources and high-end experimental facilities. Scientists need to observe these chemical reactions at the atomic level, charting the paths of electrons for individual atoms while watching several hundreds of these atoms interacting with one another. Moreover, they would like to study these phenomena under a variety of conditions, an approach that would be impossible experimentally but can be done using computational modelling. Computational scientists then share these models with experimentalists, providing further insights into spectroscopic experiments that use focused light to illuminate atomic-level behaviors in a chemical reaction.

This is only the first point when HPC plays an important role, though. “Simulating the electrons by solving Schrödinger’s equation is the first step. Here, we are basically guessing what we have in the system by uncovering the atomic structure of the catalysts during experiments,” Jones said. “What the experiments can’t tell us, however, is how the reaction mechanism works at the atomic level, but the simulations can."

In essence, the first phase of modelling and experimental work allows the researchers to get accurate, atomic-level detail of water atoms on the surface of the catalyst. Once the researchers feel confident that they have an accurate picture, they begin the second phase, which allows them to make slight modifications to inputs and model how the reaction proceeds under different conditions. This rapid-fire approach to modelling allows the researchers to observe how the reaction changes under the influence of small changes in voltage or of variations in the composition of metal alloys being used as the catalyst, among other inputs.

Through its work, the team identified a particular alloy, iridium oxide mixed with niobium (Ir60Nb40Ox) that behaves nearly as stably as pure iridium, but requires 40 percent less of the precious metal. While the team knows that much more work needs to be done to identify other materials that might be suitable as an electrocatalyst, it feels confident that the two-pronged approach of spectroscopic experiments and large-scale simulations is the ideal method for moving the research forward.

Like many researchers in his field, Jones indicated that being able to scale up electrolysis to the point it can function on a global level still faces many challenges. But the promise of using clean hydrogen gas to spin turbines in power plants or developing new fuel cells that could supplant combustion-based automotive engines has scientists focused on finding ways to make the process more efficient.

Through a large, international effort, the code used by Jones and his collaborators was recently modified to run on hybrid supercomputing architectures—machines that use graphics processing units (GPUs) in addition to traditional CPUs. The team also began working on scaling its application to take full advantage of increasingly powerful architectures such as those made available by GCS at its three centers.

While Jones indicated that faster, larger computers make it possible for the team to study larger molecular systems or more permutations of a given system, the investigators are still limited in the number of atoms they can simulate during each run. Next-generation systems will help address some of these computational hurdles. At the same time, however, simulating ever larger systems will introduce a new problem: his team will primarily be limited by system memory availability—an increasingly common challenge for researchers at the forefront of computational science in many research domains.

Despite more technical hurdles to overcome, the team feels confident that using HPC to accelerate experimental efforts will prove indispensable moving forward. While water electrolysis may not immediately become the dominant method for changing the world’s energy grid, Jones feels confident that hydrogen will prove to be a game-changer in electrical energy storage and conversion. Whether scientists wind up finding a cheaper, more readily available replacement for iridium or developing alloys that can use iridium in sparing amounts, the promise of clean energy storage motivates the team to keep searching.

"Electrolytic water splitting links the electrical and chemical sectors, and when we think about going climate-neutral by 2050, that link becomes critical,” Jones said. “It is not just energy storage that we have to worry about; it is also sustainable chemical production. Green hydrogen could help solve both of these issues.”

Editor's note: A version of this article originally appeared on the Gauss Centre for Supercomputing website.