At a running event held to promote networking in Baden-Württemberg's digital technology community one thing was clear: the key to success is not only good cooperation among politics, academia, and industry, but also a dose of courage.

On July 27, experts in the field of digitalization ran around the University of Stuttgart’s Vaihingen campus—literally. Held with special guests Thomas Strobl, Baden-Württemberg's Minister of the Interior, Digitalization and Migration, and ultramarathon runner Jürgen Mennel, the event, titled "Digitalisierung: Läuft," aimed to raise awareness of Baden-Württemberg as a location for digital expertise.

The event started with presentations by staff at the Fraunhofer Institute for Industrial Engineering (IAO) and the High-Performance Computing Center Stuttgart (HLRS) that showcased some of their most innovative projects. In the CAVE visualization facility at HLRS, Strobl observed, among other projects, a 3D simulation of blood flow in the human body that could help medical professionals to visualize this complex process. 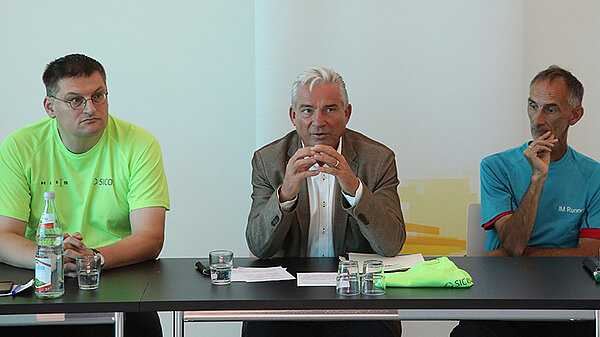 During a press conference associated with the event, HLRS Director Prof. Michael Resch emphasized that Baden-Württemberg has the ideal foundation for a successful digitalization strategy. He also pointed out that HLRS’s successful collaborations with municipalities as well as with Germany’s industrial heavy hitters could be further developed through effective collaboration among politics, industry, and the scientific community. “We have a politics that says, 'we want it' and this willingness is noticeable from abroad,” he said, referring to positive feedback he has received from partners in the United States and China.

Strobl also praised Baden-Württemberg’s progress in digitalization and pointed out that, for those who strive to be among the best in any field, things do not always go according to plan. He encouraged everyone involved to remain persistent and focused on the greater goals of the effort.

The athletic side of the event was organized by the Ministry for the Interior, Digitalization and Migration; the Fraunhofer IAO; and former world champion (over 100 km) runner Jürgen Mennel. Annette Weisbecker, Deputy Director of Fraunhofer IAO, and Andreas Wierse, Managing Director of SICOS BW, joined Mennel, Strobl, and Resch on stage for the press event.