As the capital of Baden-Württemberg and one of Germany’s major innovation hubs, Stuttgart is home to a wide variety of academic institutions and research-focused industries. In an effort to highlight its many strengths in science and engineering, the city hosted its first annual “Smart und Clever” science festival. The festival, which ran June 26–July 6, showcased 75 different Stuttgart-based research organizations across 78 different events. Staff from the High-Performance Computing Center Stuttgart (HLRS) actively participated in the festival as members of panel discussions and as exhibitors.

On Monday, July 1, Prof. Michael Resch, Director of HLRS, joined the Baden-Württemberg Minister for Science and the Arts, Theresia Bauer, Prof. Phillipp Henning, and Prof. Cordula Kropp for the discussion, “Künstliche Intelligenz: was kann sie, was soll sie, was darf sie?” (English: Artificial Intelligence (AI): What can it do? What should it do? What should it be allowed to do?).

As the title implies, the discussion was focused on artificial intelligence and the opportunities and risks associated with incorporating AI technologies into different economic and societal sectors. The panel discussed how scientists can more effectively communicate with the general public about disruptive technologies as well as society’s ability to influence the areas where AI is being used. The roughly 150 attendees actively participated in the discussion, and during the Q&A period several Stuttgart residents asked about the value and risks associated with self-driving vehicles. “The audience was very engaged in this discussion,” Resch said. “They want to be included in the development and implementation of new technologies that will impact their daily lives.”

From July 1–July 4, members of the HLRS visualization team presented an exhibit in the Stuttgart city hall showcasing technologies for improving public engagement in city planning. The exhibition, done to showcase the “Reallabor Stadt:quartiere 4.0” project, allowed visitors to use a virtual reality (VR) projection to explore Stuttgart-West, a hydroelectric power project in the Black Forest, and Herrenberg, a small city south of Stuttgart.

The project originated as part of an effort to optimize traffic and pedestrian routes in and around Herrenberg and to investigate how new digital tools could empower community residents to steer changes in their respective communities. The team sees VR environments, particularly those that can be easily set up and torn down, as extremely valuable tools for both decision makers and the general public that can translate complex data into easily understandable visualizations. Such environments also enable disparate groups of decisions makers—from urban planners to architects to politicians—to speak a common language when making city planning decisions. 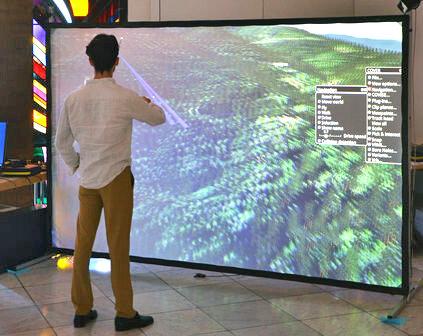 “We want people to be involved in urban planning and their communities’ climate and energy transitions,” said Fabian Dembski, HLRS staffer and participant in the Reallabor project. “The advantage of participating in a festival like this is that we can get exposure to a broader and more general audience. It is a huge chance to showcase our work in a more light-hearted way.”

In addition to the demonstration of Herrenberg, the team held a workshop about modelling urban spaces in mixed reality. The workshop centered around questions of managing living space and building density, identifying infrastructure needs in urban spaces, and assessing the toll of development on the environment.

On Tuesday, July 2, Dr. Andreas Kaminski, Group Leader of HLRS’s Philosophy of Science and Technology of Computer Simulation department, participated in a panel discussion at the Staatstheater Stuttgart (State Theater Stuttgart). Before the discussion, panelists and visitors had just watched a performance of the play The Physicists (German: Die Physiker) by Swiss writer Friedrich Dürrenmatt.

The play deals with themes surrounding the ethical responsibilities of scientific research and use of disruptive technologies. During the discussion, Kaminski and his fellow panelists, including the play’s director, literary scholar Prof. Dr. Sibylle Baumbach, and Jordis Emilia Herrmann, representative of the student group reason[Ing.], discussed several complicated themes surrounding scientific ethics. The discussion was moderated by Carolin Losch, dramaturge at the Staatstheater Stuttgart.

The panel also considered one of the best modern-day examples for disruptive technology that has piqued public interest—the ever-growing application of AI both in front-line scientific research and in tools the general public use in their daily lives.

Kaminski indicated that the discussion focused on how scientific research was organized and funded. Students in engineering and science programs wished that topics related to the ethics and responsible practice of science would play a bigger role in their studies. Other attendees in the audience expressed concerns about how funding sources for large-scale research initiatives can directly or indirectly influence research focuses or even outcomes. Kaminski concentrated on the need for researchers to develop trust with the communities they serve, and how trust must be nurtured and developed by building genuine relationships between disparate communities.

“Being a national HPC center, we are also deeply rooted in Stuttgart and its community,” Resch said. “Events like these help us stay in touch with the general public and to both show what we can do for society but also get feedback about the needs of the society of which we are all a part.”