Taking Quantum Dots for a Spin

A team from TU Dortmund is using high-performance computing to model how lasers could regulate spin dynamics in quantum dots. These small structures could have big implications for improving quantum computers and other advanced electronics.

Modern computing technologies enable researchers across many scientific domains to simulate phenomena that are too large, small, dangerous, or difficult to observe through experiment. In fact, supercomputing initiated a new golden era of particle physics research, playing an indispensable role in helping illuminate interactions at the atomic level and below.

Since the 1920s, researchers have documented the laws that govern the atomic and subatomic world in painstaking detail. The quantum world, as it became known, operates according to a different set of laws than those first posited by Isaac Newton. As modern-day researchers have gained a deeper understanding of quantum mechanics, they have identified opportunities to manipulate and control subatomic particles in ways that could lead to new kinds of electronics or other technologies. Among these promising advances, quantum computing—which, through the application of quantum mechanics, processes information in a fundamentally different way than traditional computers—promises to accelerate certain kinds of research and the development of new applications.

While traditional computers rely on extensive patterns of 1s and 0s to transmit information in bits, quantum computers utilize so-called qubits, particles operating in accordance with the laws of quantum mechanics. Each qubit can be facing up, down, or in its “superposition,” meaning it simultaneously represents both positions. Although the existence of this kind of state—where electrons can represent multiple positions simultaneously—could benefit data-intensive modelling and simulation, further understanding is needed of these counterintuitive phenomena. Scientists must also develop methods for reliably manipulating and controlling quantum particles, specifically with regard to how individual electrons “spin,” or orient themselves under specific conditions.

In order to better understand how subatomic particles behave and interact at a fundamental level, a multidisciplinary research collaboration based at the TU Dortmund University is using high-performance computing (HPC) resources at the High-Performance Computing Center Stuttgart (HLRS) to simulate some of these complex interactions. The team is partnered with experimentalists in the international collaborative research center 160 (ICRC 160) established at St. Petersburg and Dortmund to study how electrons’ spins (and the spins of larger nuclei nearby in a given system) interact under certain conditions, and how laser technologies could help manipulate these systems.

In its most recent work, the team has focused on quantum dots. Developed within the context of semiconductor technologies, researchers found that quantum dots could control electrons’ spins under the right conditions, making them good candidates to serve as qubits in future quantum computers.

“A quantum dot can be seen as a trap for a single electron and therefore for its spin,” said Prof. Dr. Götz Uhrig, Professor at TU Dortmund and lead researcher on the project. “If we are looking at a solid state device, there are as many as 1020 electrons and their spins behave in such a way that no net effect can be seen for the outside; the spin of an excess electron, however, can be detected and manipulated.”

When physicists study atomic systems, one approach involves strategically adding or removing an electron to determine the properties that it imparts on the system. As they learned more about how to modify these systems, scientists and engineers came up with relatively inexpensive ways to create silicon-based semiconductors that today are nearly ubiquitous in consumer electronics.

Now, as scientists turn their attention to developing new electronics such as quantum computers, they have employed specialized semiconductor nanostructures—so-called quantum dots—in order to better direct electrons and their spins as is needed in order to follow certain algorithms.

Within a quantum dot, researchers can use lasers or other technologies fix the positions of excess electrons in space, making it easier to manipulate their spins. Experimentally, researchers must account for the strange, novel physics that govern quantum spins of electrons, in their “up” and “down” states, as mentioned previously.

Accounting for superpositions ultimately means that researchers must calculate millions of possible states of electron spins for each quantum dot. And while simulating the spin of an individual quantum dot interacting with roughly thousands of nuclear spins may not be too computationally demanding, a meaningful simulation or experiment will have to deal with thousands of quantum dots at once. 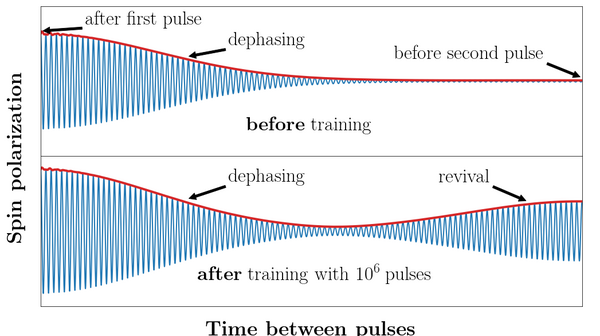 This image shows the evolution of electronic spin polarization in time. Each pulse generates a finite signal which strongly oscillates since the spin precesses around the applied magnetic field. Due to the interaction with the disordered nuclear spins, the signal quickly dies out (upper panel). After long series of pulses, the nuclear spins are trained and a coherent revival of the signal occurs. Image: Philipp Schering, TU Dortmund.

One common experimental approach is to use laser pulses to “train” quantum dots so that their spins act synchronously. “My colleagues send pulses to the system that orient a quantum dot’s spin,” Uhrig said. “When they do that for quite a long time, they get some response before the next pulse. So you see some polarization, then it dies out, but when you have done that for a long time, there is already a signal before the next pulse comes—that shows that the system has been trained successfully.”

In experiments, researchers will shoot a laser pulse every few nanoseconds and training the dots can take seconds or even minutes. This means that a realistic simulation must cover an extremely wide range of time scales. Performing the necessary calculations in a reasonable amount of time would not be possible without large-scale supercomputing resources.

Uhrig and his collaborators use HPC primarily to help understand the data seen in experiments quantitatively. This approach allows the team not only to efficiently verify how well a given quantum system has been trained, but also to make predictions using the physical model they develop. If the team has designed the model correctly, new phenomena shown in models should then also be found in experiment.

“This back-and-forth is a general feature in the dynamics between theory and experiment,” Uhrig said. “When theory tries to be close to experiment, many parameters need to be taken into account, meaning you have to do heavy numerics, and that’s where HPC comes in.”

Using this iterative approach, the team uncovered strategies for amplifying signals in the data that indicate how electron spins respond to laser pulses. Ultimately, this knowledge could improve researchers’ ability to predict and rely on quantum-scale behavior when executing tasks in quantum computers and other advanced electronics.

The team was able to access large core counts to run larger calculations on HLRS’s Hawk supercomputer during its acceptance phase last year. “On short notice, we were offered short queues for large core counts, and that made a big difference on how quickly we were able to do our research,” Uhrig said. Now that the team has been able to further optimize its code on Hawk, the researchers feel confident that its future allocations will enable them to take on more complex calculations for larger systems.