As part of a selective enrichment program, teenage students visited HLRS to gain some hands-on experience with simulation and visualization.

On March 6, 19 students aged 15-18 visited the High-Performance Computing Center Stuttgart in conjunction with the Kulturakademie Baden-Württemberg (Baden-Württemberg Cultural Academy). The event was organized in cooperation with the Verein Deutscher Ingenieure (VDI, the Association of German Engineers) and the University of Stuttgart.

Since 2010, the Kulturakademie has offered talented students enrichment programming in which they can dive deeper into topics in the arts, literature, science, and technology. The program runs for one week in the summer and one week in late winter, and includes both workshops and creative activities. The goal of the program is to give motivated students the opportunity to discover and cultivate their interests and hidden talents, and to learn about potential career directions they might want to pursue. Students visit the HLRS CAVE. 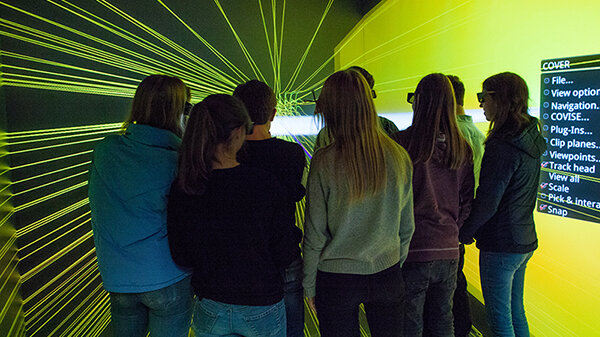 In the CAVE, students saw a 3D visualization of a simulation they had calculated earlier in the day.

During their visit, the students received an introduction to supercomputing and enjoyed a tour of the HLRS computing room. They also completed an exercise in which they attempted, with the support of HLRS experts, to computationally optimize airflow over an airplane wing. They later viewed the results of the simulation in the CAVE, an immersive facility for 3D visualization. There, they also learned how virtual reality can support data analysis, as well as some applications of augmented reality that HLRS has been developing.

Natalie Spahr, project leader of the TecCity program at the VDI's Baden-Württemberg chapter, organized the event, and was pleased with the cooperation with HLRS. "The visit at HLRS was a highlight of the Kulturakademie program and very exciting for the participants," Spahr said. "The chance to see visualizations of simulations in the CAVE was particularly impressive. We look forwad to coming back again next year to learn about the new supercomputer."