A comprehensive digital model of the theater in virtual reality will preserve and support study of the landmark, home to the oldest functional stage machinery in the world.

Built in the first half of the 18th century, the Palace Theater at the Ludwigsburg Residential Palace is significant not only for its opulent Baroque interior but also for the innovative technology built into its stage. Designed by engineer Johann Christian Keim, machinery constructed from wood and ropes made it possible for a single person located beneath the stage to automatically move background scenery without closing the curtain. Audiences at that time are said to have watched in astonishment as stage settings changed without any visible human intervention.

Today, the Palace is a museum that offers visitors insights into courtly life in the time of Duke Carl Eugen and King Friedrich. Because of the ongoing COVID-19 pandemic, however, it was recently forced to close its doors to normal operation. The Palace administration took advantage of this unusual situation to invite the High-Performance Computing Center Stuttgart (HLRS) to undertake an important act of digital preservation. Based on today's state-of-the-art digital technologies, HLRS's contributions will enable people to experience the historic theater in new ways.

Using a digital 3D scanner over the course of several weeks, members of the HLRS Visualization Department first created a data set representing the theater's interior. As Visualization Department leader Uwe Wössner said, "To describe this in simple terms, the scanner uses a laser to 'touch' every surface in the room," creating a point cloud that corresponds to the exact geometry of the theater. Once the scans were completed, the researchers used HLRS's high-performance computing facilities to integrate all of the scans into a comprehensive digital model. The model includes not just the walls and stage of the theater, but also Keim's machinery. 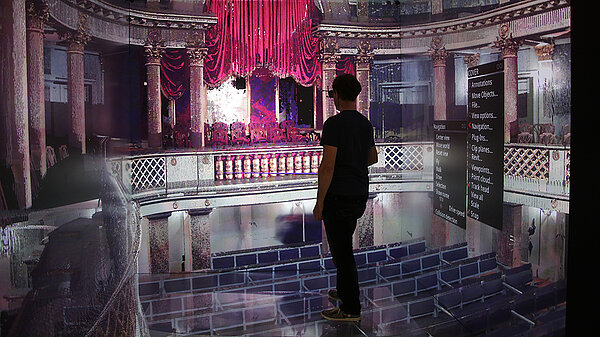 The result is much more than a static picture of the theater. "Using this point cloud, we can represent the theater and all of its machinery in virtual and augmented reality (VR/AR)," Wössner explained. In ongoing work, the team is transforming the data into an immersive digital twin, a virtual, interactive model that will reproduce the physical theater in extremely high detail. Once complete, the digital twin will be able to be displayed, for example, in HLRS's CAVE VR facility. Wearing 3D glasses, visitors will be able to experience the illusion of moving through the space as it might have looked in the 18th century. In addition, a digital reproduction involving interactive animation of the stage machinery will make it possible to closely observe its design, as well as how the parts worked together during operation.

In a press release, Stephan Hurst, administrative director of the Ludwigsburg Palace, commented on the new opportunities that the digital twin of the Palace Theater will offer: "We can learn a great deal about how the technology functioned and about the interaction of its many parts without having to actually touch anything. This will help to protect this one-of-a-kind monument." He also anticipates that visitors will find great benefit in the virtual model. "The digital twin will in the future make it possible to bring the theater to life. Even the preliminary sketches look very impressive. The virtual model will support new kinds of demonstrations that are not possible due to the fragility of the original." Hurst also predicts that the model will be of great interest to researchers who are continually learning more about the castle and developing new ways to present it to others.

From Ludwigsburg to Versailles and beyond

Based on the Ludwigsburg project, Wössner is also involved in a multidisciplinary collaboration between researchers at the University of Stuttgart and scientists elsewhere in Europe. Together with Professor Kirsten Dickhaut at the university's Institute for Literary Studies, discussions are underway with colleagues in France interested in using digital tools to research the Royal Opera at the Palace of Versailles. According to Wössner, "Over the long term, the use of digital twins has the potential to provide a foundation for research combining research from many different disciplines from engineering, the humanities, and the social sciences."

Also supporting these efforts is the Media Solution Center Baden-Württemberg (MSC-BW), a nonprofit organization founded by HLRS, the Center for Art and Media (ZKM), and the Hochschule der Medien to promote collaboration between scientists, technologists, and arts and media organizations. "One goal of the Media Solution Center is to enable culture and creative industries to access and use cutting-edge digital technologies in ways that offer audiences new kinds of experiences," said MSC-BW Director Matthias Hauser. "Just as Keim's mechanical innovations offered new opportunities for the theater in the 18th century, digital twins could support new kinds of artworks in the context of e-culture in the near future."